Celebrating and learning about think tanks

The Premio PODER al Think Tank del Año in Peru, inspired by Prospect Magazine’s own award, offers an opportunity to celebrate the good work that think tanks do for their countries and learn a lot about them in the meantime.

Thinktankers from all over the country met last 29th October at the El Virrey bookstore in Lima for what could become an annual think tank party. For the record, the winners were: 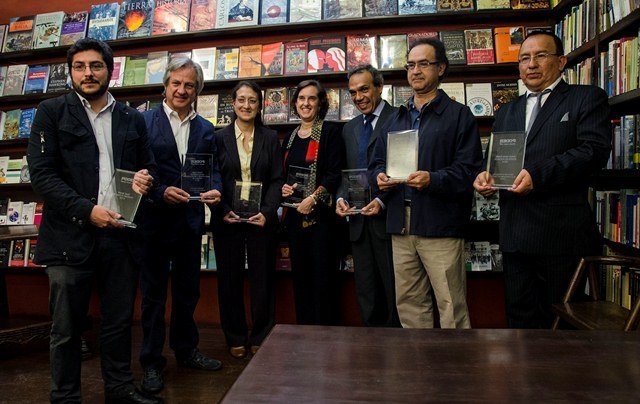 The award celebrates think tanks’ capacity to set the agenda (CIUP, IPE and Apoyo Consultoría); to introduce new research methods and techniques (CIUP and Macroconsult); to involve new policy actors (IPE, Soluciones Prácticas, and IEE); to help understand the social problems broadly (GRADE and IEP), deeply (CIUP), and historically (IEP); to affect practice directly (Soluciones Prácticas); and to protect important issues even when they are not urgent (SPDA).

The ceremony confirmed the interest in such an award. There were representatives from all the finalists present. Over 140 people signed up to the event close to 100 joined their peers to celebrate their success. We even had a surprise visit from the Minister of the Environment who found time in his busy pre-COP20 schedule to show-up to congratulate the winners.

The think tanks shared the good news themselves:

But one of the main reasons for organising this award is that it provides an excellent opportunity to learn more about think tank -certainly Peruvian think tanks. Below I highlight some of the issues that emerged during the process and some of the lessons I think I have learned:

On the definition of a think tank

Tom Medvetz has made this point before. Think tanks define themselves as such as part of a political act. By doing so they differentiate themselves from others. Similarly, funders, the media, NGOs, Universities, policy bodies, political parties, consultancies, and others can define them as think tanks -in an equally political act.

In developed countries, the space that think tanks inhabit is more clearly defined in part because the organisations that lie just outside the boundary are also more clearly defined: Universities are well-funded, parties are well established, government research bodies are professional bureaucracies, the media has clear(er) purposes, consultancies are consultancies, advocacy NGOs are recognised, etc. But in developing countries these organisations are hard to define: Universities survive by undertaking consultancies, the media often acts as advocacy organisations, activists present themselves as experts, consultants are often lecturers, political parties are unstructured and temporary, etc.

In these more confusing contexts, several types of organisations can take on the roles and functions of think tanks.

But to decide which qualify and which don’t as think tanks it is not enough to open or close the doors to a set group of organisations across the world. This decision needs to be made at the local level and on a case by case basis.

The panel of judges chose to accept organisations that had been rejected as think tanks the previous year. They were influenced by a number of factors including: their own adoption of the label, their efforts to invest in research capacity, their communication approaches, and their commitment to participate in the local think tank community.

On their business models

The definition is closely related to the business models of think tanks. We find many different models in the relatively small sample of candidates -each deserving further analysis:

On the their contributions

Think tanks contribute to policy in a great number of ways. When we started the process in 2013, most people in Peru focused on think tanks capacity to produce high quality research. The 2003 award included an award for best research and one for best communication strategy. We wanted to make it clear that think tanks were about more than just research.

In this year’s competition we found a much greater variety of types of contributions that we could have expected. The panel was interested in the introduction of new research methods and techniques, for example. New bright young minds recruited fresh from post-graduate degrees seem to have made a difference in the one to watch category, Macroconsult.

They were also interested by the capacity of think tanks to create new think tanks. The winner of the economic policy category, CIUP, captured their attention on the basis, partly, of the foundation of two new think tanks: one focused on the study of mining and its effects in Peru and the other on the relationships between Peru and China. This is not something that we often think about when we consider the contribution of think tanks but it falls within the ‘creating spaces for debate’ function. In setting up these new bodies CIUP gives the issues a degree of sustainability that maybe a programme or project could not achieve.

SPDA won the award for the category of best think tank on environmental policy. But it really won for its commitment to the issue over the long term. Although one would expect climate change to be at the top of the agenda in Peru given its vulnerability to even the smallest of changes, it is only recently that the issue has enjoyed the coverage it deserves. The judges considered SPDA played a role in this: both in acting as custodians of the issue and, more recently, bringing it to the top of the agenda.

There was also something about long term commitments in the award to the think tank of the year. IEP’s contribution, according to the judges, includes its historical lens to the study of Peru’s challenges. In her introduction to the award, Carolina Trivelli, former Minister of Development, said that understanding a country like Peru was a hugely complex challenge. More so because one has to be able to understand the history of the challenges we face. IEP has managed to incorporate this into its work thus providing an invaluable source of nuanced knowledge for today’s decision makers.

Finally, the judges identified another important contribution that think tanks can make. And they made a point of referring to this several times.

In the cases of Apoyo Consultoría and Macroconsult, the judges considered that they had been particularly good at creating and articulating new connections between the public and private sectors -two communities that rarely talk to each other in a constructive manner. IEP, they considered, had been highly effective, especially during the last year, in convening two groups that have not, historically, been able to work together either: the political left and right.

IPE’s and Soluciones Prácticas’ efforts to take the debate to the level of regional governments and open spaces for discussion beyond the capital city, Lima, were commended, too. So was GRADE’s capacity to establish long and robust relationships with think tanks and initiatives in other regions of the developing world.

All of these are elements of a convening and connecting function that think tanks can perform rather well. When referring to Chinese think tanks, this functions has been described as a window or a highway.

On their approaches to influence

In the meantime, there are some approaches that are worth mentioning because they deserved the attention of the judges:

These are some of the approaches that think tanks use to influence.

An opportunity for other countries

When we started the Premio PODER in Peru, we had the intention to encourage other think tank communities to follow this example. Our model in Peru has relied on the voluntary agency of a local publication and a very committed and hard-working group of ‘judges’.  We have made a point of keeping the aid industry, which funds many of the think tanks, out of the organisation of the award.

In other countries, a think tank donor may be the driver -the facilitator or producer. It may fall onto them to convince a local magazine or newspaper of the importance of such an effort (although this should not be hard).

I think that funders interested in learning more about think tanks, at a local level, should seriously consider this type of award. They will have to be patient, though. It may take a few years before it delivers its full potential -I think the Premio PODER needs another two years to become an established award although this second year has proven to be a key milestone in the right direction- but lessons will come in early on in the process.